This post will explore the solutions to the question #4 of the famous website cakeinreview (here the link).

your solution should return:

solution first. Then try to solve it in

This brief article is about the tower of Hanoi. Wrote this super simple C++ for a student and thought maybe it could be helpful.

disks to a support pole (choosing the right on is part of the solution, see the code for further detail), then move disk

in the correct position, and finally move the first

disks from support pole to the correct location. Let the recursion does the magic!

The base case is when we have only one disk to move. Simply move the disk in the correct pile.

Construct a binary Tree from its inorder and preorder traversal

Construct a Binary Tree from its inorder and preorder

This article will investigate the problem of reconstructing a binary tree given its inorder and preorder traversal.

which has the following in order and preorder traversal respectively.

Given IN and PRE how can we construct the original tree?

The key idea is to observe that the first element in

. This means that in order traversal has processed k element before to process the root, meaning that the number of nodes of the left tree of the root is

. Obviously, if the first

We will use this idea to write a recursive algorithm that builds the tree starting from its traversals. The algorithm works as follows:Read More »Construct a binary Tree from its inorder and preorder traversal

List Cycle Detection Linked list cycle detection problem is a very instructive and fun problem to reason about. This article will state the problem first and then explains how we can solve it efficiently while giving some insight on the underlying math. A list can gets corrupted and some node can be linked by more than one node, as in the following figure. This could lead to never ending traversal of the list. So it make sense to solve the following problem: List Cycle Detection - Problem Statement Given  a linked list, detect if the list is circular i.e. contains a cycle Find the starting… Read More »List Cycle Detection

HOW-TO: Dynamic Message of the day

This article is  about setting up a dynamic message of the day (possibly informative and fun) as header of each newly opened shell.

The final result will be something like the following: 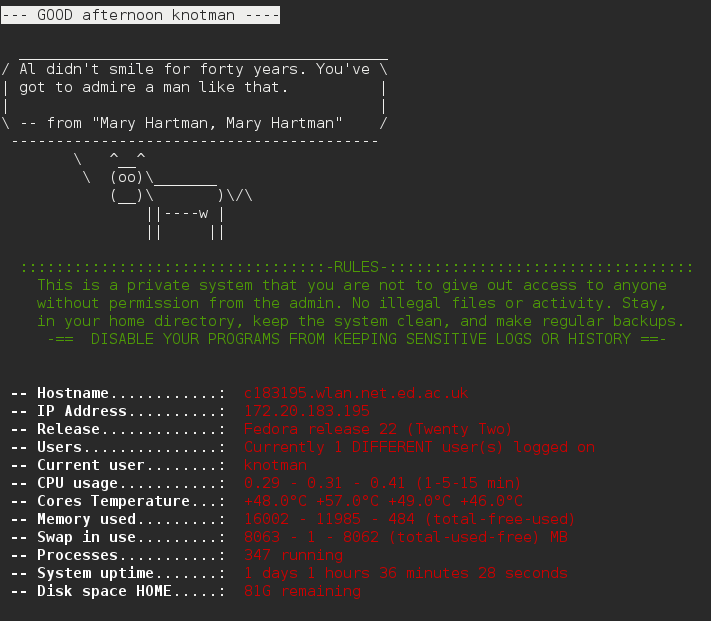 utility and some informative info about the status of the system as:

The script file can be easily configured and extended to suits the your needs. Colors can also be easily customized.

In this post I will describe how to get started with the latest versions of hadoop and hbase describing all the step to obtain a working hadoop installation. The steps described here can be easily used to perform a working installation on a large cluster (even tough it can requires additional steps as shared filesystem for instance).

Question: write an algorithm that take as input a matrix of type T  and size

For examples if the following is used as input matrix

using  the following  equality predicate (==3) (i.e. returns true if the passed parameter is 3) and

the resulting matrix is:

Hint use template for make the procedure as general as possible.

Question: Given a square matrix of size M and type T, rotate the matrix by 90 degrees counterclockwise in place.

For example the algorithm should return the right matrix if is left one is passed as input.

Question: given two string write a method to decide if one is a permutation of the other.

This is a common question that could be easily solved if we know in advance which is the size of the alphabeth. A straightforward approach could be to sort both strings and then compare them. This approach has complexity

due to sorting. We can do better and lower the complexity to

if we reason as follows: given a boolean sequence of the same size of the alphabet  initially false initialized.  Then what happen if  for each char we found in the  string

we negate the value of the correnspoding bool in the sequence? We end up having the

appeared an odd number of times and

otherwise. Now if the other string

is a permutation of the first one, we all agree that for each char in

it contains the same number of occurrences. This means that if we apply the same process as before on the boolean sequence using as input the string

). So if the sequence does not contains any true value, than it means that the strings contains the same elements i.e. they are permutation of each other.

Question: implement an algorithm to determine if a string has all unique characters

The idea behing this (fairly easy) question is that whenever we found that any chars is repeated at least twice we should return false. In order to do that we have to look at each char we are loloking for a solution which complexity is at least

. We are free to use any support data structure.

is the size of the ASCII charset.