Bird flocking is an extremely interesting natural phenomenon that have been widely studied as witnessed by the number of papers in literature). I will present here a work on aggregate motion of large number of boids in a virtual environment with the presence of predators using CUDA as computational framework. The model presented here is based on a work of Reynolds (1987) which is based on three key behavioral rules:

The environment is parameterized using the following a set of parameters that describe the size of the virtual environment and the duration of a timestep. What is really interesting is the set of bird's parameter that describe how a bird behave and react to event in its surrounding. Some notable parameters  include the Fyeld Of View (FOV), peak velocity

and others (see figure). 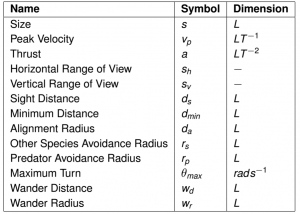 The environment is partially observable and the portion of space that is visible to each bird is defined by its FOV. FOV is defined as follows:

the position vector of the object

's frame of reference, then

's neighbor if and only if the followings hold:

is the maximum horizontal range of view,

is the maximum vertical range of view and 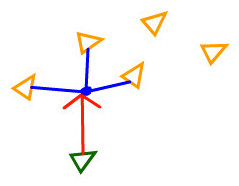 which is basically a weighted average of neighbors position.

A bird try to keep certain distance between itself and
its neighbors. Bird

determines how strong is the repulsion against to the neighbor

Bird's alignment is computed as follows

It is a weighted average of the neighbors's heading direction.

Other species and predator avoidance
Other species avoidance is a behavior pretty much similar to the separation. The only difference is that only birds that belong to other species contribute to the result.

Predator avoidance is also a "flee or separation" behavior, but what happens here is that we do not take into account the current predator position, but instead, birds try to "separate" from predators's next position (the prediction is made from current position and velocity and acceleration of the predator). 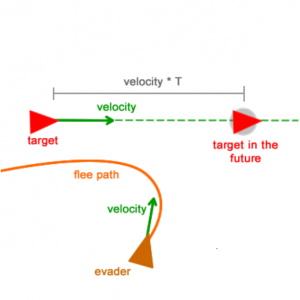 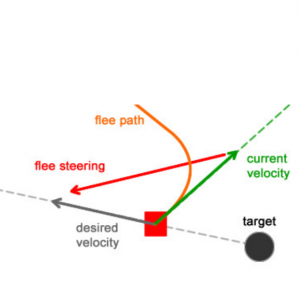 is defined as follows:

The model has been implemented in CUDA to speedup the simulation. The following is a short video which I used during my presentation at PDP16 conference.  The model and the implementation described in this article are much more greatly described in the following slides (download here).